Anxiety and the Kingdom of the Crystal Skull

Therapy is great, but it's weird at first.

No, "weird" is the wrong word.

It's strange and uncomfortable and bizarre and upsetting and painful and the exact opposite of everything that we learn in life.

As we grow up, we learn that some people are unsafe. Some people are not trustworthy. Many of us have friends that we will entrust with our deepest, darkest secrets. There are other people who we wouldn't trust with anything, ever.

We learn these lessons when we trust someone with a piece of our lives, and that person betrays our trust. When that happens, not only is a friendship ruined, but we are less likely to open up in future friendships.

By the time we reach adulthood, many of us have a hard time opening up to anyone at all.

This is why therapy is so strange. You meet a person for the first time, shake their hand, step into their office, and then are expected to open yourself up entirely. Sure, it's not forced out of you, but when they ask, "So, what's going on?," you can't just say, "Oh, nothing much," because the therapist knows that that's a lie. You wouldn't have sought out therapy if there was 'nothing much' going on.

Life teaches us to remain closed off to others until we've spent at least a few months as friends. "Don't tell intimate details about yourself to others, because they may tell other people, or may use that information against you."

When I sat down in my therapist's office for the first time, I didn't really know what to do. I'd spent decades learning to avoid telling strangers too much about myself. Now this lady sitting across from me was expecting me to do exactly that.

Here's the thing: I knew it was safe in the room. I knew my therapist was safe. I knew that she would keep my confidence. I knew that she could and would try to help me improve. Still, it felt wrong. I'd lost so much trust in strangers over the years that it took every ounce of energy to begin unloading my problems onto this person.

It gets easier. I wish there was a better way to say it, but there's really not. You have to go through the weirdness for a while. I did, at least. My first few sessions were so uncomfortable, because I'd spent years putting up walls and barriers around certain parts of my life and my thought processes. But the more sessions that went by, the easier it was to share pieces of me that I don't talk about with many other people.

So it was strange at first, and then it became easier.

And then it got waaaaaaaayyyyyy more difficult.

We started probing into some things that I wasn't prepared to address/deal with/work on. Things I didn't even realize were a part of my life.

It's been healing, but healing often hurts first. 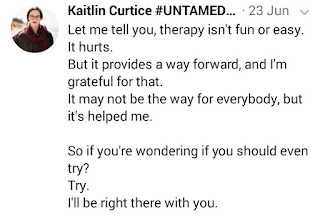