Where We Should Begin 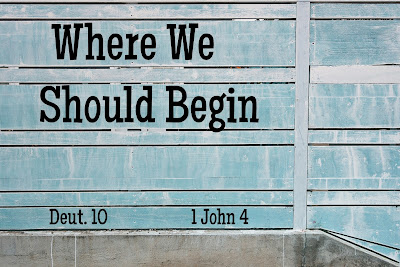 The story begins in the desert. There's a guy taking care of some sheep. He's on the lam because he killed a guy and doesn't want to be prosecuted for it.
He's taking care of sheep, and a nearby bush catches on fire, and the voice of God speaks from the bush (like you see everyday). And the voice of God says to the man, "I've seen my people being oppressed in Egypt and I've heard their cry for release from their slave-masters, because I know their pain. I've come down to rescue them from the Egyptians." And the voice of God says that he's going to use this man, Moses, to bring these people out of slavery. He's heard their cry, and he plans to save them.

So he pulls them out of slavery. It's a miracle. And then...well...where do they go? They're in the desert. Nothing's really nearby, and they're a bunch of former slaves. They don't have a homeland. So they begin life as a free tribe, wandering together in the desert, with God as their leader. This kind of life was actually pretty normal. In the world at the time, each nation or group or tribe had their people, their identity, their security, their ideas, their ideals, their understandings, their leaders, their worldviews, and in many cases, their god or gods. Your nation or group or tribe was your entire life. They were your identity. You understood the world through your nation, your tribe, your group.

God uses this shepherd to bring the people out of slavery and makes them into their own nation/tribe/group, and now they have to learn how to live together as a free people. They haven't done that before. Sure, they were free before slavery, but that was generations ago. None of these people have never known each other as free people. So how do they live together? Well, God gives them a bunch of laws. People need laws, rules, and guidelines to know how to live with one another. And most of these laws involve how people within the group interact with one another. They're interpersonal laws. These laws appear barbaric, and yeah, they are barbaric. But they were how the early Israelites understood how they were to live with each other in their own world, at that time, as a part of the larger group. The laws helped the people know that their society was just and fair. The laws also helped the people understand that their society was safe.

Safety laws were important, not only between people in the group, but because other groups often wanted to defeat and kill your group. If you got into battle with another group, one of your groups would win and the other would lose, and the losers would usually be annihilated. Why? Because you had to annihilate them if you wanted to make sure that they wouldn't come back and get revenge. So people weren't only concerned with safety from those in their own group; they were concerned that other groups wouldn't come in and destroy their entire civilization. Outsiders were threats. If they came in to your group, it could be because they're spying, or because they want to do some damage to your way of life. So every nation, every tribe, every group, needed to have a plan about those outside of their group.

Most nations would do one of two things when dealing with foreigners: either 1. steal from/enslave them in order to gain something from them, or 2. kill them so they are no longer a threat. This is why it's so shocking when Leviticus 19 says "Don't take vengeance on or bear a grudge against any of your people; rather, love your neighbor as yourself; I am the LORD" (Lev. 19:17-18), but shortly after this says "If a foreigner stays with you in your land, do not do him wrong. Rather, treat the foreigner staying with you like the native-born among you--you are to love him as yourself, for you were foreigners in the land of Egypt; I am the LORD your God" (Lev 19:33-34). The command to 'love your neighbor' is expanded to include the foreigner and alien among the people. This is a radical law from God, since foreigners were seen by most as dangerous.

"But David, who exactly is a foreigner? Don't words in the Bible sometimes have different meanings than the ones we use today?"  Why yes they do. Thank you, fictitious question-asker. The closest analogue in our world to this word "foreigner" or "alien" is a refugee. Someone who had to flee their land because of famine or war.

Repeatedly, God tells the people to assist the poor and foreigners among them, saying "When you harvest the ripe crops produced in your land, don't harvest  all the way to the corners of your field, and don't gather the ears of grain left by the harvesters. Likewise, don't gather the grapes left on the vine or fallen on the ground after harvest; leave them for the poor and the foreigner; I am the LORD your God" (Lev. 19:9-10, also Lev. 23:22, Deut. 24:19-22). Foreigners were to be included in celebratory feasts as well. In most situations, they were given equal or even better treatment than the Israelites. This is radical stuff. And God isn't messing around when he says it. Early on while giving these laws, God says "You must neither wrong nor oppress a foreigner living among you, for you yourselves were foreigners in the land of Egypt. You are not to abuse any widow or orphan. If you do abuse them in any way and they cry to me, I will certainly hear their cry" (Ex. 22:21). When God's people called out while in slavery, he heard their cry and saved them, destroying the Egyptians in the process. Now he's saying if a foreigner, widow, or orphan is mistreated and they cry to him, he will hear their cry. You can assume the threat behind this statement. "Remember when I saved you from the bullies in Egypt? Don't become those bullies to other people, or I'm going to save them from you."

So why is God making all of these special concessions for people outside of his chosen group? It says in the book of Deuteronomy that God "secures justice for the orphan and the widow; he loves the foreigner, giving him food and clothing" (Deut 10:18). There's the answer. God loves them. Just like he loved you while you were in Egypt, he loves those in other groups and tribes and nations as well. And God is making clear that he expects the people to have the same heart as he does. "Therefore, you are to love the foreigner, since you were foreigners in the land of Egypt" (10:19). When God's people truly turn their hearts to God's desires and thoughts and purposes, they will care for the foreigner as well.
Because God cares for the foreigner. He loves them.

So here's where I think that many of us Christians today have missed the story. When we begin talking about those who flee death or war or gang violence or rape or violence or famine in other countries, many Christians begin the conversation with talk of safety and security. Are safety and security important? Sure. That's why I have a lock on my house. That's why my car locks. That's why I don't walk around Pier Park at 2 AM. Safety is an important concern. But it should not be the beginning point for God's people when talking about immigration or refugees.

God commanded his people to love their neighbor, then expanded that love to include the foreigner. And this wasn't in a world that was predominantly safe. For the Israelites, it was a considerably more dangerous world than the one in which we find ourselves. They were on the move, and their "Homeland Security" was just a bunch of people in the front of the group hoping they could protect the rest of the group.
It. Was. Dangerous.
And God, in that dangerous world, called his people to welcome the refugee, to welcome the stranger, to welcome the foreigner, and not to oppress them, going so far as to say that he'd hear their cry if they did oppress those who were weak.

God's command for love of neighbor and love of foreigner should cause us to grieve when we see families being divided at the border. We should grieve when we see refugees fleeing war-torn areas with nowhere to go (and even if they do find a country that takes them in, they have a language barrier, no money, and no history in the country that will enable them to find jobs and housing).

If our immediate, first response to these stories is "Hey, we need to keep our people safe," then we've missed the story.
We need to reclaim the story.

"But...the people...they could be evil."
Yep. Jesus died for them. Because he loves them.
That's the Gospel.
Our job is following God. God loves the foreigner, and calls his people to do so as well.
Our job, then, is actionable love for the people that God loves.

This is where we should begin. We don't begin with fear, and we don't begin with political posturing. We begin with the understanding that God loved those who were in need and saved them. And God calls his people to do the same. If we want to live lives that follow God's leading, we need to pursue loving those who are in need, who are orphans, who are widows, who are foreigners, because God's love reaches to those people.

Remembering how God includes the foreigner in the command to love our neighbor, let's look at 1 John: Dear friends, let us love one another, for love comes from God. Everyone who loves has been born of God and knows God. Whoever does not love does not know God, because God is love. This is how God showed his love among us: he sent his one and only son into the world that we might live through him. This is love: not that we loved God, but that he loved us and sent his son as an atoning sacrifice for our sins. Dear friends, since God so loved us, we also ought to love one another. No one has ever seen God; but if we love one another, God lives in us and his love is made complete in us.

God's love is in us and made complete when we love one another. We must begin with love. We cannot begin with fear. As John says later:

This is how love is made complete among us so that we will have confidence on the day of judgment: in this world we are like Jesus. There is no fear in love, but perfect love drives out fear, because fear has to do with punishment. The one who fears is not made perfect in love. We love because he first loved us.
(1 John 4:7-12, 17-19)

Is there danger in love? Sure. True love is always dangerous.

But there is no fear in love, because perfect love drives out fear.