The Lie I Believed About Depression

Warning: talk of suicide and self-harm in this post.


Here's a lie I believed once:

If your faith is strong enough, you won't be depressed or have suicidal thoughts.


This is a part of my life I didn't really want to talk about.
In March/April of this year, I started wishing for death. It wasn't all the time; it wasn't even much of the time. However, there were distinct moments where I would start to worry or panic about something in my life--a conversation or an upcoming meeting--and I'd wish that I was dead.

I had no idea why. I'd never had thoughts like this before.

And these thoughts about "wishing for death" became more intense thoughts of self-harm and suicide.

I've worked in churches for a number of years, and I know how seriously to take it when someone mentions suicide. So when I started having thoughts of suicide myself, it completely freaked me out. I called my therapist one Thursday afternoon and told her all of these thoughts I'd been having, and she set an appointment for the next morning.

She asked me if I'd made any kinds of plans. I said I hadn't.
She told me that while scary, and while serious, suicidal thoughts are actually a relatively common and understandable response to high levels of stress. They're also not uncommon when a person goes through therapy, since dark moments in a person's life are brought to light. That can cause intense stress and anxiety, and lead to suicidal thoughts.

I was reminded to use diversion/behavioral/meditation techniques (which helped), and made a list of five people to contact if these thoughts got worse, or if I started making plans.
Thankfully, I haven't had to make those calls.

I want to say that the thoughts stopped after that conversation, but they didn't. I had them daily for about four months. It was usually a quick thought that came and went, but another one would follow shortly after.

Every time that I'd have one of these thoughts, I'd feel a strong pang of guilt. Why? Because of the lie I'd always believed:
If your faith is strong enough, you won't be depressed or have suicidal thoughts.

But I was depressed.

I did have suicidal thoughts.

Some of these questions were practical:
Could I effectively help people when internally I was struggling with the will to keep going?

But the worst thoughts that I had during this time were the ones that called into question my ability to navigate ordinary life situations.
I'm in my early 30's, relatively healthy, fantastic job: one I've always wanted and have felt called to do, good marriage, loving wife, two kids who can be a handful but not more than any other children, roof over my head, food to eat each meal time, and a bunch of friends.
How can a person with all of those things going well possibly want his life to end?
I have friends and acquaintances who have experienced hell on earth. It would make perfect sense for them to have these kinds of thoughts.
There is no reason why a person whose life is as well off as mine should feel the way that I feel.

Comparing yourself to others can be ugly.

I was constantly criticizing myself for these thoughts, which made me fixate more on the fact that I had these thoughts in the first place, which in turn led to more depression, more dark thoughts, more anxiety, more panic attacks, more withdrawing from others.

The depression remained. The thoughts remained. For around four months, I had suicidal thoughts pretty much every day.

But I kept up with therapy and with all of the behavioral, meditation, and diversion practices, and things started to get better.
Not perfect, but better.
Over the last couple of months, I've very rarely wished for death. The depression has remained, but it's noticeably less of a strain on my day to day life (although it is a strain on my life, for sure).

I had faith, I spent time in prayer, and yet I needed the help of a therapist.
If your faith is strong enough, you won't be depressed or have suicidal thoughts simply was not the case in my life. And I'm not alone. There are many other Christians who have depression and have wrestled with the same kinds of demons.

Am I downplaying faith? No.
Do I believe in the power of prayer? Yes.
Do I think that God can and does heal people from physical, emotional, mental, and spiritual ailments? Yes.

However, I've come to realize that a person's faith can be incredibly strong, and that person can still experience depression.
A person may suffer thoughts of self-harm even though they have a healthy prayer life.
Someone can turn to Jesus with their physical, emotional, and mental ailments while simultaneously taking antidepressants.

Therapy isn't weakness. Medication isn't weakness.
If you're someone who is experiencing severe depression, thoughts of self-harm, or thoughts of suicide, get help. Talk to someone. See a counselor. Take medication if it's prescribed for you. Whatever you may need to get your head above water enough to be able to navigate life--do it.

From someone who's been there recently (and someone who never thought he'd be writing a post like this), it's worth it.

And seriously, if you need to talk to someone immediately, the suicide prevention hotline number is 1-800-273-8255.
Call it. Getting help is not weakness. 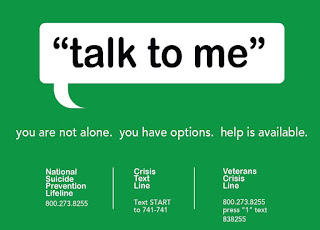