People to be Loved

People to be Loved
by Preston Sprinkle 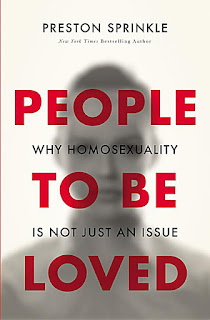 I've been waiting for this book.

As a pastor of a city with one of the highest gay populations in the country, I'm asked often by church members how our church will respond to LGBTQ persons.  Most of the time, this question is presented in one of two ways:

1.  A mother or father is talking with me and timidly asks how I as a pastor and the church would respond if their gay or lesbian child were to come to our church.  Usually this is said through tears and a shaky voice.  Or...

To person 1, I always respond, "I'll shake their hand or give them a big hug if they're okay with it, and tell them I'm so glad you're at our church."
To person 2, I normally ask if they want to get coffee.  These conversations are always easier over coffee.

At coffee, there will usually be more talk about how "the Bible is clear about homosexuality," but when I ask how the person I'm speaking to thinks Christians should respond to the LGBTQ community, I almost always hear a similar response, and it's very interesting:

"We need to tell them what they're doing is wrong.  The Bible is clear about their sin, and we can't condone sin.  God says that they're going to go to hell, and we need to tell them about their sin because there's a lot of gay people in the world and they're pushing an agenda and they need to be stopped.  They're making a choice and trying to take down the church with them...
<VERY LONG PAUSE>
"But we need to love them."

I always find this response interesting (and troubling).  If I were gay, bisexual, or transgender, I would probably hear this as a not-at-all-loving response.  The "we need to love them" sounds like a tag at the end that was added when the speaker realized he or she hadn't yet said anything about Christian love.

I understand that these are responses peculiar to my own situation.  These are responses from people that I've witnessed, and they do not reflect all Christians, or necessarily even most Christians.  There are many Christians--conservative, progressive, moderate, and all others, who respond with more care when talking about LGBTQ people (I especially like this video from Bruxy Cavey, who considers himself conservative on the topic of homosexuality). I am also very aware that often when Person 2's posture is taken, there are many, many, many other issues in their life or their past that could be causing them to react in such a way.  However, I've seen and heard this response enough that I felt it important to talk about what it could look like for a Christian to actually show love to a gay, lesbian, bisexual, or transgender person, even if they don't agree with them.

For the most part, however, writings from non-affirming Christians seem to mostly take Person 2's posture.

It seemed that most writers either took the stance that you must affirm LGBTQ relationships, OR you cannot show real Christ-like love to them.

And then along comes Preston Sprinkle.

In People to be Loved, Preston Sprinkle looks in depth at the five (yes, there are only five) texts that deal with homosexuality in the Bible.  He discusses what homosexuality is, how it was understood in the world of Leviticus, as well as the Greco-Roman world of the New Testament.  Ultimately he comes to a conservative view on whether or not a person can have intercourse with someone of the same sex according to the Bible.

He points out that when someone comes out as gay, it's simply the "tip of the iceberg." There has been an unbelievably long journey, along with much struggle and pain, before somebody is able to come out.  For a Christian then to respond by quoting Leviticus 20:13 and then shunning the person is to humiliate and dehumanize.

How then shall we live?

Jesus doesn't support extortion or theft.  But his call to Matthew/Levi is "follow me."  His call to Zacchaeus is "I have to come to your house."  Jesus didn't affirm Matthew or Zacchaeus' behavior.  He affirmed their humanity (79).

He led with love.  And he continued to model that love.  As Sprinkle says in chapter 5, "Remember, repentance doesn't lead to God's kindness.  It's God's kindness that leads to repentance (Rom. 2:4). In the same way, non-affirming Christians should flood LGBT people with kindness, and such kindness will lead to repentance. But if it doesn't, the kindness doesn't stop. Because "our Father who is in heaven...makes the rain rise on the evil and the good, and sends rain on the just and on the unjust" (Mt. 5:45). And he doesn't shut up the skies when the unjust don't repent. He keeps refreshing them with scandalous rain.  The evangelical church needs to get this. I am not calling on the church to give up its convictions. I am calling the church to change its posture, to be convicted about Christ's stubborn one-way love that he called us to mediate on others" (84-85 emphasis mine).

On a personal level, I have a hard time talking about LGBTQ issues within the church.  It's dangerous; it can (and has) gotten me in trouble.  It would be safest to simply ignore the topic.  However, when I (rarely) do talk about homosexuality with church folk, what I consistently try to do is to open up the conversation and try to communicate the fact that 1. these are unbelievably complex situations, 2. there are very few passages that address homosexuality, 3. when we look at the culture in which these texts were written, it becomes much less 'clear' than we might have previously thought what exactly the Bible is actually talking about when it mentions homosexuality, and (most importantly 4. there are people at stake when we have these discussions.

I'm kept awake many nights by the thought that how Christians react to LGBTQ people in today's world may lead to more suicides.  We have blood on our hands by remaining unloving toward people who are LGBTQ.  Whether or not we agree with them, we certainly don't want to hurt them.  But we have.  We've hurt them; we've caused many to take their lives.

I don't want to be the reason, or even a small, tiny, miniscule part of the reason that somebody took their life.

I was grateful when I read that Sprinkle is kept awake at night by these same thoughts.  Not because I don't want him to sleep (I would never wish a lack of sleep on anybody), but because it feels so rare to find a non-affirming Christian who has such a heart and love for the LGBTQ community.

I don't agree with everything in this book.  I'd like some more attention given to the idea of covenant in terms of marital relationships.  I also think that there is a bit too much attention given to a few instances of same-sex relationships throughout history.  By far, these were not the norm in society, and I think Sprinkle has made too big of a discussion about these few relationships.  For the most part, however, this is a thorough look at what the Bible says about homosexuality, and what it even means to talk about "homosexuality."  It is not a topic that can be discussed in a matter of minutes, and Sprinkle takes the time to really unpack the topic.

I've been reading widely on this topic for some time, and I'm going to start leading a reading group through this book (as well as material from other sources) later this year.  Info for that will be coming soon.

This book is a thorough, careful, pastoral examination of a divisive topic, and it's very welcome.
Posted by David Libby at 2:45 PM